Connecting between Metro and D.C.-Area Airports and Other Transportation Services

Connections between Metrorail and Metrobus are available at all Metrorail stations. An easy way to find your connection is to use Metro's online Trip Planner to plan your trip.

For information about the many local bus systems in the region, see the Local Bus Systems page.

The map below shows the Metrorail system in relation to other transportation systems serving the Washington, D.C. area. (The map is not to scale.) 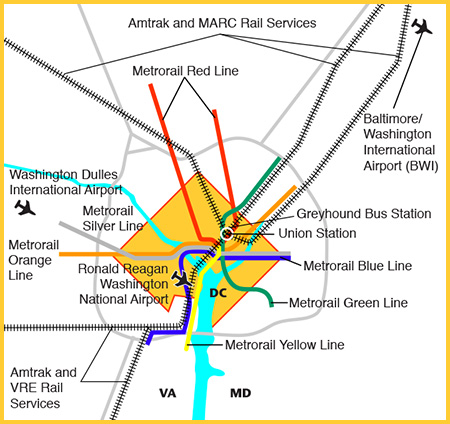 Metrorail does not go directly to Washington Dulles airport. Service to the airport is part of the planned Phase 2 construction of Metrorail's Silver Line.

Metrorail does not go directly to BWI. Rail transportation between BWI Airport and Union Station, on Metrorail's Red Line, is provided by Amtrak and MARC Penn Line trains.

Directions to the Airports

Directions for driving to the airports, as well as public transportation options:

Amtrak passenger rail service, MARC and VRE Commuter Rail Services, and Metrorail all meet at Union Station. In addition to Union Station, Metrorail connects with these services at these Metrorail stations:

Metrorail connects with several intercity bus services at Union Station. Connections to Metrobus and local bus services are available at most stations. A list of Metrorail stations with services available, including a PDF bus map for each station, is available on Metro's Stations page.

Through a partnership with Zipcar, Metro offers carsharing at select Metrorail stations. A list of stations, including carsharing information for each, is available on Metro's Stations page.

Union Station combines a busy urban railroad station with over 130 retail shops and restaurants in a magnificent Beaux-Arts building. Union Station was opened in 1907 and beautifully renovated in the 1980's. The most visited destination in the nation's capital, Union Station plays host to exhibitions, cultural events and private special events such as the Presidential Inaugural Ball and citywide galas. It's a special treat to visit when the station is decorated for the holidays.

Union Station is also a stop on Metrorail's Red Line, connecting Metrorail with Amtrak and the MARC and VRE rail systems. More about transportation services at Union Station.

The station is located just a few blocks from the Capitol building, at 50 Massachusetts Avenue, NE, Washington D.C.