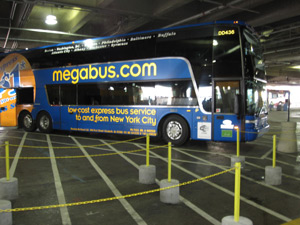 These long-haul services carry passengers between cities, usually with only one or two stops within each city and few or no stops in between. Also see Commuter Buses and Commuter Rail for information about bus and rail services in the Washington, D.C. area that are geared mainly toward serving commuters who work inside the Capital Beltway.

Amtrak – Passenger rail service operating in 46 states and the District of Columbia in the U.S., and in three Canadian provinces. Amtrak operates more than 300 trains each day, to more than 500 destinations. In Washington, D.C., Amtrak stops at Union Station.

FlixBus – Intercity bus service with routes from Washington, D.C. to New York and Philadelphia, and Rockville, MD to New York.

Greyhound – Greyhound Lines, Inc. is the largest provider of intercity bus service, with more than 2300 destinations in North America. Greyhound has a station at 1005 1st St., NE, Washington, close to Union Station.

Megabus – Intercity bus service to 50 major cities in the Midwest and Northeast U.S., and Canada. The D.C. stop is at Union Station.

TripperBus – Intercity bus service with routes from Arlington and Bethesda to New York.

Vamoose – Bus service from Bethesda, Arlington, and Lorton to NYC.

Virginia Breeze – Connecting Blacksburg, Va. with Union Station in Washington, D.C., with seven stops in between. Operated by Megabus.

Busbud – Find, compare, and book bus tickets for intercity trips all over the world. Busbud's website and mobile app will let you compare prices, bus schedules and pick up and drop off locations so that you can find the cheapest bus ticket for your trip.

Wanderu - Find, compare, and book tickets for intercity bus and train trips throughout North America and Europe. Explore by Wanderu is an online resource that helps users find travel opportunities based on date, location, and budget.